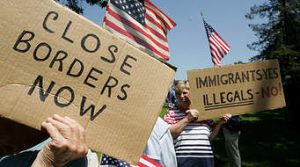 Despite media reports of a massive crackdown by President Trump on illegal immigrants, just a tiny percentage of the nearly 1 million on the government’s deportation list have been arrested, according to statistics provided to Congress.

The 680 seized in recent sweeps by U.S. Customs and Immigration Enforcement agents represent just .07 percent of the 950,062 with deportation orders as of May 21, 2016.

Responses to questions from the Senate Judiciary Committee, provided by Thomas D. Homan, currently the acting ICE director, revealed the struggle the agency faces as it moves to deport illegals, many with criminal records and slapped with “final orders of removal” after exhausting their court appeals.

“As of May 21, 2016, there were 950,062 aliens with final orders of removal on U.S. Immigration and Customs Enforcement’s (ICE) national docket. Of those aliens, 939,056 were on ICE’s non-detained docket and 11,006 were on ICE’s detained docket,” said Homan’s answer to questions from Judiciary Committee Chairman Sen. Chuck Grassley.

As it moves to find those not detained, ICE is beefing up its force, hiring up to 15,000.

There are an estimated 3 million illegal immigrants with criminal records in addition to their illegal status and the administration has said it will make them a priority for removal. The numbers in the ICE answers could have adjusted but deporting criminal illegals was not a priority in the last months of the Obama administration, according to experts.

Immigration experts said that sanctuary cities are mostly to blame for the huge number of illegal immigrants with deportation orders who are not in custody.