President Trump gave a good speech on Tuesday night, but his presidency is still hanging by a thread. Attorney Larry Klayman says an “alternative government” in the intelligence community continues to target him.

“These intelligence agencies are more powerful than the president himself,” Klayman said on the Fox Business Network. “They have the ability to blackmail people in this administration to the point that the American people’s interests are going to be subverted.” 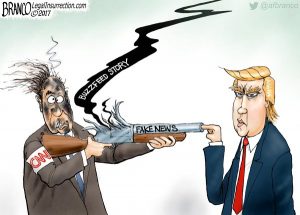 Klayman, the founder of Freedom Watch, said, “How can he [President Trump] represent the interests of the American people when he knows the NSA is likely wiretapping everything he says with foreign leaders and everyone else?”

It may seem like ancient history, but the media used to be concerned about surveillance of American citizens by U.S. intelligence and law enforcement agencies. After President Trump was elected, such concern suddenly disappeared. In fact, the media became the recipients of illegal leaks of private conversations by Trump administration officials. One such leak forced the resignation of national security adviser Michael T. Flynn.