In yet another example of how modern black entertainers edify American youngsters and supplement the treasury of American culture, a fellow you never heard of named “Bow Wow, the nephew of a fellow you have heard of named Snoop Dogg, publicly remonstrated with President Donald Trump. 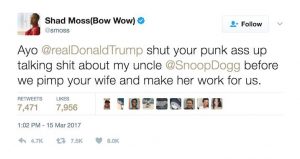 After Mr. Trump tweeted that Mr. Dogg’s video of someone shooting a Trump look-a-like in the head would have generated outrage had Mr. Dogg likewise depicted President Obama, Mr. Wow, undoubtedly calling upon the large vocabulary he received during his many years in school, warned Mr. Trump that he, Mr. Wow, had no intention of tolerating Mr. Trump’s effrontery:

Forgive the delay in reporting this. It’s a few days old, but again, it does show just how much rappers have to offer our vast storehouse of American cultural treasures.

Note that while the original Tweet has been deleted, Mr. Wow has not been banned from Twitter, unlike many Alt-Right figures.

Attorney General Jeff Sessions on Monday vowed to press forward with the Trump administration’s efforts to rescind the Deferred Action for Childhood Arrivals (DACA) program, despite a judge’s ruling last week that it must be restored. Sessions issued […]

Exhibit doesn’t speak for the millions of white women who voted for Trump! AltRightTV The College Fix Reports below: Exhibit, in response to Trump, raises funds for Planned Parenthood A sketch of a naked woman, […]

One dead, several wounded after shooting at biker event in Iowa