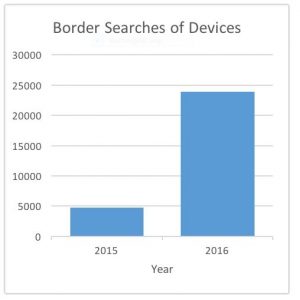 A group of First Amendment attorneys has filed suit against the federal government after a surge in electronic device data searches at US border crossings.

On Monday, the the Knight First Amendment Institute (KFAI) at Columbia University filed a Freedom of Information Act (FOIA) lawsuit against the Department of Homeland Security (DHS) and Immigration and Customs Enforcement (ICE), seeking “statistical, policy, and assessment records regarding the government’s searches” involving electronic devices.

In a press release, the group states that they filed a FOIA request on March 15. When the request was ignored, they filed suit in US District Court for the District of Columbia to access the information.

The KFAI filed the request after Cynthia McFadden, senior investigative and legal correspondent at NBC News, released findings of a dramatic increase in American citizens who had their electronic devices searched at border crossings.

Melania Trump is kicking butt at being First Lady of the United States and she has no plans of stopping anytime soon! It is projected that Trump will have saved MILLIONS less than her predecessor […]

A costume bearing the inscription “Mexico will pay!” has been described as racist by the man who helped develop the “Make Mexico America Again!” baseball hats. And Jerónimo Saldaña wants Amazon to stop selling it. […]

BROOKLYN, New York (LifeSiteNews) – A program that aims to give young children “unabashedly queer role models” is making its way across the U.S. via various public libraries. “Who wants to be a drag queen […]

Army National Guard veteran on Portland unrest: ‘I think it’s time’ to ‘do something about it’