Exhibit doesn’t speak for the millions of white women who voted for Trump! AltRightTV

The College Fix Reports below:

Exhibit, in response to Trump, raises funds for Planned Parenthood

A sketch of a naked woman, spread eagle, her menstrual cycle spilling out over the floor.

A painting of a drowning naked woman in a bathtub under leaching hands dangling from the ceiling, with what appears to be Trump’s profile sneering down at her.

A drawing of a woman blowing her brains out with two fingers drawn into something akin to a pistol.

These are examples of student artwork pieces that greet visitors to the University of North Carolina Chapel Hill’s SAMple Gallery, billed as an student-run “alternative arts space.” 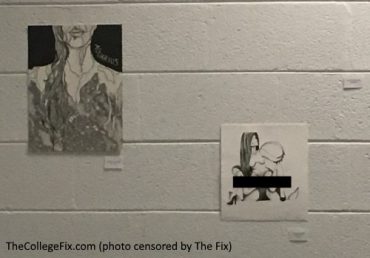 The current exhibit, called “Nasty Women,” seeks to serve as a “response to increasing threats to the individual and collective rights and safety of all female-identifying folks” and to “demonstrate solidarity among artists who identify with being a Nasty Woman,” according to organizers.

It’s related to a larger “Nasty Women” art exhibit launched in New York City in January after Trump’s election. The exhibit served “as a fundraiser to support organizations defending these rights and to be a platform for organization before the Trump Presidential Inauguration in January,” NYC organizers stated.

The SAMple Gallery at UNC-CH envisions a presentation of multidisciplinary ideas in the presence of risk and experimentation as a vanguard of culture.

The installation in Queens curated works of like-minded artists from around the world with the hopes to bond together as a victimized unit and spread their “nastiness” as retaliation against the wave of perceived threats to women’s rights.

If you want to make the rabid feminists lose their minds, this advice is a great way to do it! -snip- Considering the levels of marital failure among so many high-profile Feminsists, maybe they’re not […]

What Is Reincarnation? What Does the Bible Say about It?

The subject of death has equally fascinated and terrified people of all ages and religions for all time. Very few religions are silent about what happens to their followers after death. Beginning with the first […]

First Liberty is defending Col. Michael A. Madrid, who is being falsely accused and threatened with demotion and the loss of substantial retirement benefits because of his faith. This type of religious intolerance and discrimination […]