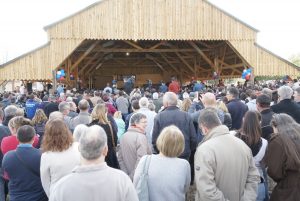 French presidential candidate Marine Le Pen  spoke out at a town hall meeting in La Bazoche-Gouet on Monday and said that she would not ask the French people to get used to terrorism, but instead said, “I will bring Islamist fundamentalism to its knees!”

Le Pen’s words came as she criticized her rival, Emmanuel Macron,  who is a globalist.

“The other candidates are only in big cities,” she said . “I have been meeting in small villages and meeting French people who have never seen a candidate come to see them. It is my place, I am here among the French people who I want to defend.”

She also tweeted out (Google translate), “In the name of which we would not have the right to protect ourselves against social dumping and unfair competition.”

She then spoke on issues of security, which is where she made her statement regarding Islam.

“On security, it will be zero tolerance,” she said. “I will never ask the French to get used to terrorism. I will  bring Islamist fundamentalism to its knees!”

Le Pen, taking a page from President Donald Trump’s “America First” playbook, said: “With me at the head of the State, never will a stowaway be treated better than a Frenchman in his own country.”

She also took time to tweet out a jab at her opponent in response to his attack on her in Marseilles on Saturday, as he spoke to people in a crime-riddled city whose population is 30-40 percent Muslim.

“Let us drive away from this campaign, far from the country, the party of hatred, that of contempt, of the withdrawal, and all of those who make us so ashamed,” said Macron, clearly demonstrating he is a traitor to France.

“I can no longer bear to hear #Macron insult France, say he wants to ‘chase’ you, patriots of France,” Le Pen tweeted.

Harrison, Arkansas has been called the most racist town in America by those who hate white Christian America. The slur is an attempt to silence people in the small Arkansas town. The Knights Party, with […]

Snickers will depict its chocolate bars in rainbow wrappers as part of a pro-LGBT ad campaign. In a piece for Gay Star News, Mitch Oliver, the UK vice president of marketing for Mars candy company, announced […]