FrontPage – Robert Spencer: Here we go again. 19 people are dead and 50 wounded in a suspected jihad-martyrdom suicide bombing at an Ariana Grande concert in Manchester, a target that the jihad murderers apparently chose because of its concentration of pre-teens and tweens, so as to maximize the potential to “strike terror into the hearts of the enemies of Allah” (Qur’an 8:60). But don’t be unduly concerned: Britain’s criminally feckless Prime Minister Theresa May is on the job, saying in a statement: “We are working to establish the full details of what is being treated by the police as an appalling terrorist attack. All our thoughts are with the victims and the families of those who have been affected.”

As canned responses go, that one is particularly packaged, processed, and colorless. How grand that she is 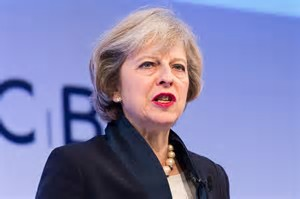 thinking about the victims and their families. And the police are on the job! Marvelous! Britons can go back to sleep, knowing that selfless public servants such as May are working tirelessly to protect them.

But there was one key element that May left out of her statement: an apology.

One of the things she should apologize for is the routine aspect of her response to this latest jihad massacre. There was nothing she said about this jihad attack that could not have been said about ten jihad massacres before it, and will not be said about the next ten. The Muslim Mayor of London, Sadiq Khan,

said after the jihad bombings in New York City in September 2016 that such attacks were “part and parcel of living in a big city” and that people would just have “to be prepared for these sorts of things” to happen, and May is behaving as if she has thoroughly internalized these instructions.

In reality, no one in a big city or a small one, or out on the farm, should ever accept jihad terror massacres as “part and parcel” of living there. Sadiq Khan’s statement was a declaration of his inability or unwillingness to do anything effective to counter the jihad threat.

And that brings us to the second and more important reason why May should apologize: because she and the political establishment she represents have allowed this to happen.

If it weren’t for the immigration policies that May and her Conservative Party, in collaboration with the other British establishment parties, have pursued for well over a decade, the jihadis who perpetrated this massacre may not have been in Britain at all. Of course, it may yet be discovered that they were “homegrown terrorists,” born and raised in the UK. But here again, the British political establishment has accommodated and appeased the Muslim community at every turn, allowing for the establishment of Sharia courts and partnering with numerous “moderates” who turned out, surprise surprise, really to be “extremists.”

Meanwhile, the full wrath of the British government has been unleashed upon those British citizens who have dared to dissent from this madness and to declare publicly their support for the preservation of British national security, as well as the national character and culture. All too many of these people have been hounded and persecuted, arrested and prosecuted on the flimsiest of pretexts. Others who were in a position to prosecute Muslim rape gangs hesitated for fear of being branded “racist.” May has, meanwhile barred foreign foes of jihad terror from entering the country at all (including me), while allowing the most hair-raising preachers of jihad violence to enter the country and preach all over it with impunity.

As she implemented these policies, what did May think would happen? What did Britons? Did they really think that by coddling their Muslim population, winking at the crimes Muslims committed in the name of Islam and in accord with its teachings, and muzzling all dissent from these policies, that it would make Muslims feel welcome in Britain, and that Muslims and non-Muslims would march arm-in-arm together into the glorious multicultural future?

They won’t. Manchester was “only the beginning,” said an Islamic State jihadi in a video released just after the massacre Monday night. And that is true: Manchester is only the beginning, thanks to Theresa May. If a modicum of sanity prevailed in Britain, she would be forced to apologize and resign in disgrace.

Instead, she is looking to be overwhelmingly elected to the Prime Minister’s office in her own right in the coming elections. Britons should enjoy that election, because they won’t be enjoying very many more of them.

35% Want to Live in a Sanctuary Community

Rasmussen The rape of a 14-year-old girl in a Maryland suburban high school by two older students who were in this country illegally has moved the sanctuary city debate back on the front burner. {snip} […]

Paul Bedard, Washington Examiner The shooter blamed for Wednesday’s bloody attack on a Republican congressional baseball team shared a tie with the 2012 gunman who attacked the conservative Family Research Council in Washington. Both were […]