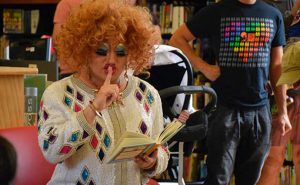 role models” is making its way across the U.S. via various public libraries.

“Who wants to be a drag queen when they grow up?” an adult male dressed in drag asks a group of children at the Brooklyn Public Library during a recent installment of Drag Queen Story Hour.

“Drag Queen Story Hour (DQSH) is just what it sounds like — drag queens reading stories to children in libraries, schools, and bookstores,” the initiative’s website states. “DQSH captures the imagination and play of the gender fluidity of childhood and gives kids glamorous, positive, and unabashedly queer role models. In spaces like this, kids are able to see people who defy rigid gender restrictions and imagine a world where people can present as they wish, where dress up is real.”

DQSH has been conducted at the Brooklyn Public Library in Park Slope since last fall, Christian News reported, with drag queens reading to children on such topics as homosexuality, gender identity and “non-conformity,” and “general youth discomfort.”

The recent Brooklyn session was chronicled on video by the UK media outlet Channel 4 News and shared on social media.

In it, drag queen “Lil Hot Mess” is singing to the tune of “The Wheels on the Bus,” and has the children up dancing along with his rendition of “The hips on the drag queen go swish, swish, swish.”

The video includes praise from parents and library representatives.

“Drag Queen Story Hour is fantastic because it addresses all of these issues of gender fluidity and self-acceptance and all of thee topics that are real, very, very real,” states Kat Savage of the Brooklyn Public Library.

“Lil Hot Mess” is shown reading to the children from “Worm Loves Worm” a book that explains “marriage equality” for kids.

“Negative comments about the Brooklyn library program have been posted online,” a graphic in the video states.

“But those are people who think that gay people are sinful or evil, or, you know, bad to begin with,” “Lil Hot Mess” states in reply. “So we are just sort of starting from such different places that it’s kind of irrelevant to me.”

DQSH has a quote from the Brooklyn Public Library’s Director of Youth and Family Services on its “About” webpage endorsing its program.

“Drag Queen Story Hour is a fun and important program that celebrates diversity in the way that children may dress and act,” Judy Zuckerman states. “It encourages children to look beyond gender stereotypes and embrace unfettered exploration of self. Programs like DQSH encourage acceptance of difference and help to prevent bullying, while providing an enjoyable literary experience.”

DQSH was started in San Francisco by author Michelle Tea, whose writings concern various areas, including queer culture and feminism. Tea also founded RADAR Productions, a platform for emerging queer artists, according to its website information. The San Francisco DQSHs are managed through the organization.

The San Francisco program is part of a broader effort at “Queering the Castro,” or “highlighting the full range of queer culture,” according SFGate.

“The Castro is predominantly a white gay men’s space now,” RADAR Executive Director Juliana Delgado Lopera said regarding “Queering the Castro. “This project is about taking back the radically queer roots of the neighborhood. With art and literature, we’re doing a series of interventions and bringing in other queer folks into that space.”

Besides New York and San Francisco, Drag Queen Story Hours are being held in Los Angeles, and other cities across the U.S., Canada, and the UK, according to its website.

DQSHs are scheduled in New York and San Francisco into June. A New York Times report said they will be expanding this spring and summer into Harlem, another Manhattan location, and to the Bronx.

The DQSH Facebook page also promotes DQSH for additional sites nationwide, stating, “Looking for a Pride activity for your preschool or elementary school? Bring Drag Queen Story Hour to your school this June!”

A flier for the April 27 DQSH at the New York Public Library Hudson Park location told readers, “A drag queen will read inclusive books as well as story time favorites and lead participants in a simple craft.”

“Come meet Harmonica Sunbeam!” it stated, next to “Harmonica’s” photo. “Best for ages 3 and up.”

In the NYT piece, a photo caption of “Harmonica Sunbeam” reading to children said that when the drag queen was asked to pinpoint the main difference between Drag Queen Story Hour and a nighttime drag show, “Harmonica Sunbeam” deadpanned, “I’m sober.”

Delgado Lopera told SFGate in February after the group’s third DQSH in the area that it was a success.

Sure, every time someone in the Trump administration does anything remotely objectionable, the media will jump all over them. Remember CNN’s breathless bulletin that President Trump got two scoops of ice cream and everyone else […]

Three Girls: How Poor White Girls Were Sacrificed on the Altar of Multiculturalism

Allison Pearson, Telegraph What is the worst moment in Three Girls, the new BBC One three-part drama based on the Rochdale child-grooming scandal? Is it when Holly realises that “Daddy”, a gross, 59-year-old Pakistani brute she […]

Seattle City Council overrides mayor’s veto to defund the police; up to 100 officers to be cut

Black man goes on profane rant against ‘Antifa’ rioters stirring up trouble in Portland: ‘You ain’t from here, motherf***er!’

Black journalist calls BLM a ‘Criminal$ Justice Movement’ that is nothing more than a ‘cash grab’ for athletes, Democrats, and media

Florida’s governor is proposing a law that would protect drivers who kill or injure people if they’re fleeing a ‘mob,’ following a spate of incidents of people driving through protest crowds