The University of Texas-Austin could become one of the largest schools in the country to provide “free” menstrual products to students.

The sponsors of the student legislative resolution are using research paid for by a menstrual-rights group to promote their cause, but the research may not back up the sponsors’ claims, according to a professor who reviewed it for The College Fix. 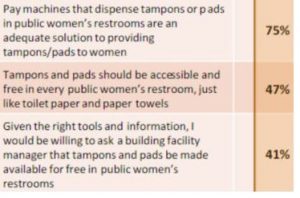 Student activists on campuses across the country have been demanding the provision of menstrual products in campus facilities, for emergency purposes or the benefit of poorer students, with mixed results.

American University’s student body president promised “menstrual equity” at the start of the previous academic year, while Syracuse and the University of Wisconsin-Madisonmade products available in men’s restrooms.

The University of Rochester blew through its tampon budget for the semester in less than two weeks, while Columbia canceled its program due to low interest.

The joint resolution was brought to the floor of the UT Senate of College Councils, the “official voice for students in academic affairs,” nearly two months ago. It was quickly approved, The Daily Texan reported then.

Co-author Jordee Rodriguez cited the difficulty of being a college student, and how often female students may be caught off guard when their cycle starts.

“Currently, 86 percent of women or menstruating people are caught off guard whenever they begin their periods, and that is academically deleterious,” Rodriguez said, according to the Daily, which did not mention a source for Rodriguez’s statistic.

Most women are saying however that they want no one interfering in this intimate part of their life. They can handle their own menstrual products.

LOS ANGELES, California(LifeSiteNews)  – Los Angeles Archbishop Jose Gomez, who is the vice president of the United States Conference of Catholic Bishops (USCCB), accepted a pro-immigration award at a gala alongside the pro-abortion attorney general […]

Professor Posts His Wish for Whites: “Let Them F**king Die!”

Jack Kerwick, Frontpage Mag Trinity College in Hartford, Connecticut is another fine illustration of the contemporary state of Higher Education. Johnny Eric Williams, a professor in its sociology department, is among the reasons why it […]

Police and protesters swarmed the University of Florida on Thursday as the campus braced for a speech by white nationalist Richard Spencer, whose planned appearance led Florida’s governor to declare a state of emergency for the area. […]