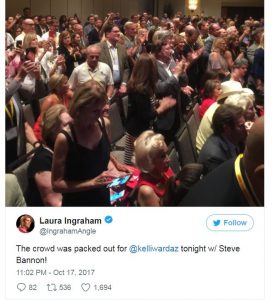 Establishment Republicans standing in the way of President Donald Trump’s agenda are falling like dominoes heading into the midterm elections in 2018, as Breitbart News Executive Chairman and former White House chief strategist Stephen K. Bannon ramps up his “season of war” on the political class.

The latest failed Republican to tap out is Sen. Jeff Flake of Arizona, who announced on Tuesday he will not seek re-election after originally planning to. Flake’s decision to avoid what would have been a bruising and likely unsuccessful battle to win renomination by Arizona Republican voters for the U.S. Senate seat he currently holds comes as Bannon and nationally-syndicated radio host Laura Ingraham campaigned for his primary challenger, Dr. Kelli Ward, in Arizona last week.

All three appeared in Washington, D.C., at the “Breitbart Embassy” on Capitol Hill, where they were attending a book party for Ingraham’s new book. It also comes on the heels of the 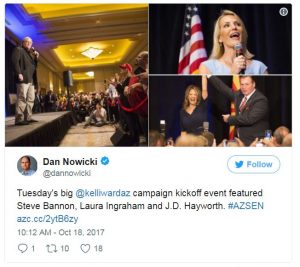 pro-Trump Super PAC Great America PAC endorsing Ward for the U.S. Senate as part of a new slate of candidates to refresh the Republican Party nationally.

“Today the Trump movement collected the scalp of America’s number one Never Trumper,” Andy Surabian, a senior adviser to the Great America Alliance—a sister organization of the PAC—told Breitbart News exclusively on Tuesday afternoon. “Jeff Flake represents everything that is wrong with Mitch McConnell’s failed vision of the Republican Party.

President Trump’s America First movement is on a winning streak now that Jeff Flake has been left on the ash heaps of political history alongside Luther Strange and Bob Corker. And rest assured that Mitch McConnell and the rest of his Never Trump establishment cohorts are next on our agenda.”