MSNBC host Joy Reid asserted on Twitter that rural Americans, aka the country folk, are a “minority” and also “the core threat to our democracy.”

Really? The farmers, and down to earth country people are a threat to our democracy? Could it be perhaps that we obtain something that liberal, city folks lack? That characteristic being common sense.

She wrote, “This is the core threat to our democracy. The rural minority — the people @JYSexton just wrote a long thread about — have and will continue to have disproportionate power over the urban majority.”

As if that was not enough to melt a few brain cells, she also demanded that we abolish the electoral college…..that way a handful of cities in the United States can control the outcome of the entire nation. Right.

Writing at the Gateway Pundit, Kristinn Taylor said that Reid was commenting an a Wall Street Journal article by Gerald Seib published earlier this month “that expressed concerns over demographic trends in the U.S. that could dilute the 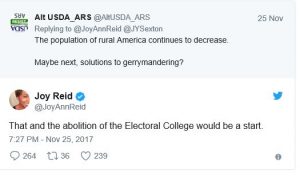 His critics charge that Mr. Trump exhibits some authoritarian tendencies of his own, and his occasional disparaging remarks about “rigged” democratic institutions seem to suggest that. The fact is, though, that the American system of checks and balances—a hallmark of the democratic model—remains strong and vibrant.

Yet there are reasons to worry about the health of the American model. Current leaders seem unable to find their way to consensus or even compromise on the biggest issues of the day, which can breed voter despair and disillusionment.

Demographic  trends also are straining the American model. Because of the way the Electoral College works, two of the past three presidents first won office while losing the popular vote. And David Birdsell, dean of the school of public and international affairs at Baruch College, notes that by 2040, about 70% of Americans are expected to live in the 15 largest states. They will have only 30 senators representing them, while the remaining 30% of Americans will have 70 senators representing them.

New York City’s shrinking middle class is now in full retreat, as masses of our most endangered population depart the city in numbers not seen since the Depression, according to analysts. After decades of sharp […]

LITTLE ROCK, Ark. — An Arkansas man was arrested on Wednesday after he destroyed a Ten Commandments monument that had been installed just yesterday on the grounds of the Arkansas capitol building. Michael Tate Reed, […]

Actor Mark Ruffalo, an abortion enthusiast who your children may know as Hulk from The Avengers, has circulated a petition to hopefully beat NBC News from hiring any more white conservatives. Per his Twitter account: […]