On Thursday, the creator of Minecraft shocked the internet and sent the social justice left into meltdown-mode by tweeting what is apparently a controversial statement in 2017: “It’s ok to be white.”

Markus “Notch” Persson not only tweeted out the thought crime, but he also smacked the leftist notion of “privilege,” which Persson described as a “made up metric used to silence and repress.”

​”Privilege is a made up metric used to silence and repress. We are all different, and that is ok. We listen to individuals and help each other based on individual strengths and needs,” wrote Persson. “We do not generalize based on skin color, bigot.”

The creator added, “believing in race based privilege needing to be checked fits the literal definition of racism.” 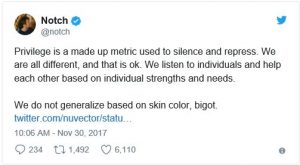 When one user said it’s also okay to be black, Persson replied: “Absolutely!”

Leftists everywhere were predictably triggered by Persson’s statement, accusing him of enabling the further “oppression” of minorities and flaunting his “white privilege.”