International security expert Olle Fjordgren warns that Sweden is “on the way to civil war” as a result of its soft justice system and inability to tackle the country’s expanding “no go zones” where crime is rampant.

In an interview with the Ingrid & Maria news blog, Fjordgren, who has been hired as a security advisor by the governments of Pakistan, Ethiopia and Mongolia, states, “We have basically given up and the criminals have seized power. Right now we have nothing to oppose and I can’t see that we could reverse the development.” 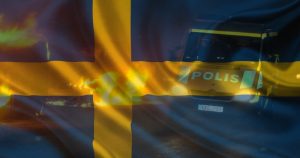 Describing Sweden as a “freight train heading for a rock wall,” Fjordgren says that the political unwillingness to admit how bad things have become, in addition to people who point out the problems being labeled “racist,” means that Sweden is close to becoming a “failed state”.

Citing Lebanon as an example of what happens to a society when integration fails and different ethnic and criminal gangs engage in turf wars, Fjordgren sees “only one possible development” in Sweden’s future – a “civil war”.

This is in part because while police are still operating by old, outdated rules, criminals have become more ruthless and play by completely different rules.

Fjordgren says that the last resort would be for Sweden to adopt a New York City-style zero tolerance policy on crime, although given the country’s progressive approach to justice, this seems highly unlikely.

Tucker Carlson: America’s southern border has been erased — does anyone in charge care?

Ten days before the 2020 election, Mitchell Ferman, a reporter for the Texas Tribune, came across a very strange sight in Starr County, Texas, which sits right on the border with Mexico. Starr County is one of the […]

The Biden Administration is standing by its decision to support migrant families at the border amid the nationwide baby formula shortage. On Friday, White House press secretary Jen Psaki addressed recent criticism from Rep. Kat […]

Tucker Carlson: Illegal immigration across the southern border will soon get much worse

Tucker: Illegal aliens now face no barriers at all Fox News host voices his concerns over illegal immigration on ‘Tucker Carlson Tonight.’ Houston, Texas, is one of the rare, nice big cities left in this […]