Former Clinton campaign spokesman Mo Elleithee said Friday that fellow Muslim Rep. Keith Ellison (D-Minn.) is “too liberal” to run the Democratic National Committee. Ellison is considered a front-runner in the election for DNC chair which will be held Saturday.

He made the comments to Vox, saying, “You’re going to be shocked at me telling you this: Ellison is too liberal to run the DNC.” 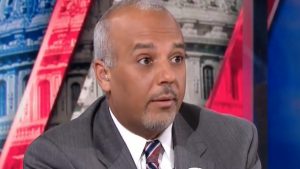 Ellison’s greatest competition is former labor secretary to Obama, Tom Perez. Elleithee explained why he was favored over Ellison, explaining, “Tom is not in bed with anybody — he served President Obama; he knows the Clintons — that doesn’t make him establishment any more than it makes me establishment. I served in Clinton and Obama’s administrations, but I’m not establishment.”