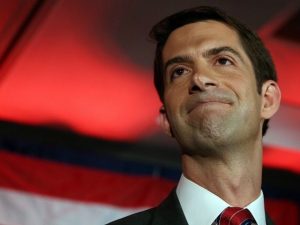 Cotton has sponsored a bill cutting annual immigration flows into the U.S. by half, by limiting entry to 500,000 foreign workers each years. It’s a popular position for a wide swath of voters: 54 percent want immigration halved or reduced to zero, including 22 percent who want a total moratorium. That includes 68 percent of Republicans and 45 percent of Democrats who want to see dramatic reductions in migration levels.

The foreign-born population is set to grow more than 700 percent from 1970s levels. Now, it stands at 42.4 million. Unless immigration controls are taken off autopilot, over 78 million foreigners will soon reside in the U.S.

Mass immigration from the Third World is crippling workers in the economy, as Breitbart News reported in July. Every single job created from 2000 to 2014 went to foreign-born workers residing in the U.S.