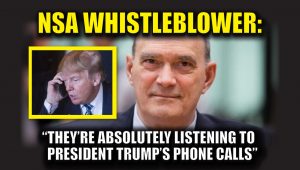 President Donald Trump is “absolutely right” to claim he was wiretapped and monitored, a former NSA official claimed Monday, adding that the administration risks falling victim to further leaks if it continues to run afoul of the intelligence community.

“I think the president is absolutely right. His phone calls, everything he did electronically, was being monitored,” Bill Binney, a 36-year veteran of the National Security Agency who resigned in protest from the organization in 2001, told Fox Business on Monday. Everyone’s conversations are being monitored and stored, Binney said.

Binney resigned from NSA shortly after the U.S. approach to intelligence changed following the attacks of Sept. 11, 2001. He “became a whistleblower after discovering that elements of a data-monitoring program he had helped develop — nicknamed ThinThread — were being used to spy on Americans,” PBS reported.