There are about 12 million Americans who, apparently, believe our country is secretly governed by a mysterious and hyper-intelligent race of ‘lizard people’. No seriously, and before you dismiss this as merely the antics of a crazy blogger on the internet, just check out the google image results of Nancy Pelosi. Even if the endless images of bug eyes, botox injected lips, and double eye lids doesn’t land you amongst the 12 million believers, you’ll at least have a better understanding of their point of view. 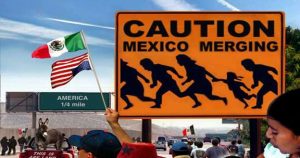 One point of view, however, that I cannot even begin to comprehend is this perplexing and outrageous idea that this country doesn’t belong to its citizens. No, sir. This country belongs to.. well, everyone else. Anyone else. Anyone who wants to be in this country as long as they vote for people who hate it. If you weren’t already aware, that’s the secret to becoming the ideal liberal voter.

It seems that somewhere around half of America agrees with this because, while Trump is President, he is only so despite losing the popular vote. I don’t say this to in any way devalue Trump’s legitimacy as President. I only want to convey that we’re surrounded by imbeciles nonetheless.

You may have heard Latino celebrity and self-described ‘news anchor’ Jorge Ramos touring the country telling its citizens that this country doesn’t belong to them. See for yourself…

According to Ramos, America doesn’t belong to citizens.

Hillary Clinton, in some of her sharpest remarks about her former rival since the election, suggested Friday that President Trump could face impeachment hearings for firing FBI Director James Comey. Clinton, in a graduation speech […]

Outsiders vs. Insiders: Irascible impeachment talk is Democrats’ most asinine rant to date

The four month anniversary of Donald Trump’s historic presidency passed last weekend with the president and first lady embarking on their inaugural overseas diplomatic trip, an occasion that would typically be observed with some gravity […]

An Irish pro-abortion group returned $25,000 to American billionaire George Soros’s foundation recently after it was exposed as a violation of a rule about political donations. The Irish government’s Standards in Public Office began asking […]