Judge Neil Gorsuch’s opening statement during Monday’s confirmation hearings shed light on the way in which he would behave if appointed to the Supreme Court. If you don’t want to watch the entire 16-minute statement, here are his three most important remarks transcribed:

1. He Has an Optimistic View of the Court
“…these days we sometimes hear judges cynically described as politicians in robes; seeking to enforce their own politics rather than striving to apply the law impartially. If I thought that were true, I’d hang up the robe. The truth is I just don’t think that’s what a life in the law is about. 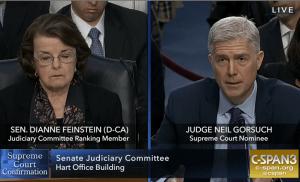 As a lawyer for many years working in the trial court trenches, I saw judges and juries — while human [and] imperfect — striving hard every day to fairly decide the cases I put to them.

As a judge now for more than a decade, I’ve watched my colleagues spend long days worrying over cases. Sometimes the answers we reach aren’t the ones we personally prefer. Sometimes the answers follow us home at night, and keep us up–but the answers we reach are always the ones we believe the law requires. And for all its imperfections, I believe that the rule of law in this nation truly is a wonder – and that it’s no wonder that it’s the envy of the world…

Pat Buchanan, American Renaissance, February 10, 2017  “Disheartening and demoralizing,” wailed Judge Neil Gorsuch of President Trump’s comments about the judges seeking to overturn his 90-day ban on travel to the U.S. from the Greater […]

The Supreme Court on Tuesday upheld President Donald Trump’s ban on travel from several mostly Muslim countries, rejecting a challenge that it discriminated against Muslims or exceeded his authority. The 5-4 decision Tuesday is the […]