St. Louis, MO – The most dangerous abortion facility in America has transported its 64th known patient by ambulance to a local hospital on March 11, 2017. 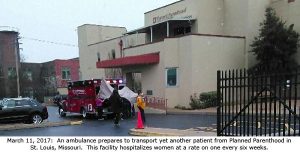 The high-volume Planned Parenthood in St. Louis, the only abortion facility in Missouri, has a dismal abortion safety record. Fire Department Records and eye-witness accounts show that it uses emergency ambulance transports for patients on average of once every six weeks dating back as far as 2009.

One witness to the most recent March 11 incident told Operation Rescue that lights and sirens announced the ambulance’s arrival at Planned Parenthood around noon. Ten minutes later-paramedics emerged from the abortion facility with a woman on a gurney that was completely “cloaked” while clinic workers deployed tan tarps to prevent pro-life activists from documenting the incident. It left without running lights and sirens.

Louisville, KY – The State of Kentucky is engaged in an epic legal showdown with the state’s last remaining abortion facility, EMW Women’s Surgical Center, in an effort to shut it down – possibly as […]

Klayman: Trump Needs to Continue to Fight Back for Conservatives Against Bolsheviks Like Nicolas Kristoff! In the End Only One of Us Will Prevail! It’s a Matter of Survival at This Point!

When George Washington was preparing to take office, everybody wondered what to call him. Senators proposed lofty titles like “Illustrious Highness” and “Sacred Majesty.” But Washington expressed irritation at such fawning, so today we are […]

What has happened to the foreign policy that Americans voted for on Nov. 8 with the election of Donald Trump, to include peace with Russia, an end to U.S. wars in the Middle East, and […]