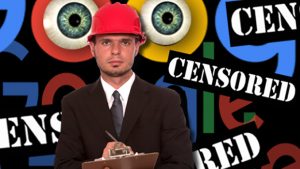 Google, the world’s biggest Internet search engine provider, has decided it should “help” readers determine whether or not a search result is “safe” by applying “quality ratings.” In its latest move along the censorship path, Google is now using independent contractors to tag search results that may be “‘offensive or upsetting.” Not surprisingly, sites discussing alternative views of history, including of the Jewish “Holocaust,” are considered especially concerning.

The most visited website in the world, whose unofficial slogan was “Don’t be evil” until it was replaced by “Do the right thing,” is certainly not doing the right thing and is also acting quite evil. Google, the U.S. multinational technology company best known for its ubiquitous, eponymous search engine, is in a new business: tagging the Internet’s search results of alternative views of the historical event known as the “Holocaust.”

But it’s not just “Holocaust” revisionists Google’s after, but all “Jew haters,” “white supremacists,” and “racists”—or at least trying to ensure that Internet searches do not end up at websites Google has classified as such.

The UK’s Guardian reported on March 15, “Google is using a 10,000-strong army of independent contractors to flag ‘offensive or upsetting’ content, in order to ensure that queries like ‘did the Holocaust happen’ don’t push users to misinformation, propaganda, and hate speech.”

There are about 12 million Americans who, apparently, believe our country is secretly governed by a mysterious and hyper-intelligent race of ‘lizard people’. No seriously, and before you dismiss this as merely the antics of […]

Senator Al Franken is the newest democrat to be exposed for sexual misconduct. If you are not aware, Franken has been outed for his sexual assault of a female news reporter in 2006. He had […]

White House press secretary Sarah Huckabee Sanders lambasted the media on Tuesday for being “misleading” with their “false narrative” about Russian collusion with President Donald Trump’s campaign. A reporter asked Sanders about the letter in which Donald […]