Let me say it again: I don’t get this campaign to bring own Confederate symbols.  As far as I can see, there are more pressing problems in the nation than getting all worked up about a statue from the Old South. 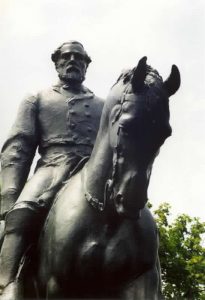 Therefore, I was happy to see that someone is standing up to this madness, as we see in this report:

The U.S. Army won’t scrub the names of Confederate generals from a base in New York City, military officials told Congress.

A group of Democratic lawmakers asked the Army in June to rename a pair of streets at Fort Hamilton, in Brooklyn, which currently honoring Robert E. Lee and Stonewall Jackson, part of a broader effort to take down Confederate memorials across the country. But the Army rebuffed the appeal.

“After over a century, any effort to rename memorializations on Fort Hamilton would be controversial and divisive,” Diane Rendon, an official in the Army’s bureau of manpower and reserve affairs, wrote in a July 20 letter. “This is contrary to the nation’s original intent in naming these streets, which was the spirit of reconciliation.”

Rep. Yvette Clarke, D-N.Y., mocked the decision as a victory for white supremacy.

“That ‘reconciliation’ was actually complicity by the North and the South to ignore the interests of African Americans and enforce white supremacy, effectively denying the result of the Civil War for generations,” she said Monday.

“These monuments are deeply offensive to the hundreds of thousands of Brooklyn residents and members of the armed forces stationed at Fort Hamilton whose ancestors Robert E. Lee and Stonewall Jackson fought to hold in slavery.”

General Lee and General Jackson mean a lot to U.S. Army history.  They were distinguished U.S. Army veterans who fought in the Mexican War and enjoyed respect from their friends in the Union.  General Lee, in particular, was one of the great military men and came in second in his class at West Point.  He was wounded in the Mexican War and earned a reputation as a great soldier.

Former KKK leader David Duke strikes out at Trump for condemning a white nationalist rally: ‘It was white Americans who put you in the presidency’

Former KKK leader David Duke struck out at President Donald Trump for condemning the violence at a white nationalist rally in Charlottesville, Virginia. In a series of tweets Duke questioned why the president, whom he […]