Britt McHenry is taking a stand against GQ naming Colin Kaepernick its “Citizen of the Year” for taking a knee. 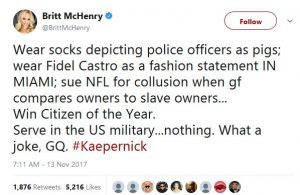 The former ESPN reporter bashed GQ and Kaepenerick on Twitter Monday shortly after the magazine announced it would be honoring the polarizing quarterback.

“Wear socks depicting police officers as pigs; wear Fidel Castro as a fashion statement IN MIAMI; sue NFL for collusion when gf compares owners to slave owners…Win Citizen of the Year. Serve in the US military…nothing. What a joke, GQ. #Kaepernick,” McHenry wrote.

McHenry was one of 100 ESPN employees let go by the network in late April. The recognizable spors reporter later said she believed her conservative views had something to do with her firing.

Since being let go by ESPN, McHenry has frequently appeared as a guest on Fox News.