British Prime Minister Theresa May is to agree to the creation of a “rapid response” government unit to fight perceived fake news, it has been reported.

The team will aim to identify and challenge stories they judge to be misleading or damaging, and will be based in the Cabinet Office, claims The Times.

According to Alex Aiken, executive director of the Government Communication Service (GCS), they aim “build a rapid response social media capability to deal quickly with disinformation and reclaim a fact-based public debate”.

In an article for PR Week, he listed the creation of the body as one of the challenges facing GCS.

“We are seeing changes in the way information is being processed and shared – a tech-savvy but disparate audience hungry for information and influenced by a small number of dominant opinion formers in the public eye,” he said. 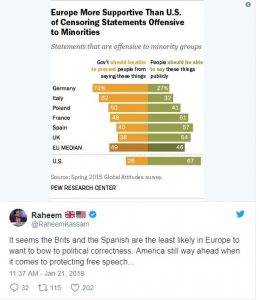 Adding: “The real test for government communications is being nimble enough to respond to the many challenges thrown at it while remaining a reliable source of information.”

The Conservative Party has recently attempted to hit back at stories on left wing websites making dubious claims about their policies, including a widely shared claim on the Independent website that the party voted against recognising animal sentience.

However, with online censorship rules and laws spreading throughout the European Union, there are concerns the government could attempt to shut down or censor legitimate stories that do not favour them.

The German parliament passed laws last year threatening fines of up to €50 million against social media firms if they fail to remove content deemed criminal because it could be perceived as defamatory or “hate speech” quickly enough.

The legislation has led to satirical posts being removed and a leader of the populists AfD party being censored for criticizing police policy and Islam.

However, the German population is, in general, more supportive of censorship than Brits, with a recent Pew Research center poll finding seven-in-ten people back the government banning statements that could be offensive to minorities.