A STUDENT was kidnapped, gang-raped and murdered in South Africa after four men armed with knives stormed her car, a court has heard. 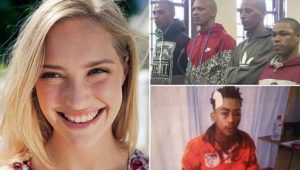 Hannah Cornelius, 21, had pulled up outside the flat of fellow student Cheslin Marsh, 22, at midnight when the attackers rushed towards her car, the judge was told.
One of the gang is said to have held a screwdriver to her chest through the open window while another put a knife to the back of Mr Marsh.

The Western Cape High Court in Cape Town heard one of the gang shouted at him: “Sit still or she dies.”
Mr Marsh was robbed of cash and his phone and locked in the car boot, the court was told.
The suspects then allegedly drove to a drug dealer’s home to buy drugs and smoked crystal meth.

Magistrates’ daughter Hannah was wedged between two of the four men in the back seat of the VW Golf which her grandmother had given to her as a birthday present, the court heard.

They then drove out of the upmarket wine producing town of Stellenbosch near Cape Town and hauled Mr Marsh into the bushes, the judge was told.

Three men allegedly made him lay his head on a rock on the ground and battered his skull with bricks until they thought he was dead.

When Marsh woke up, suffering severe head injuries and a broken arm, he staggered to a nearby home to raise the alarm about Hannah.

The gender pay gap is not what the left claims, but the liberal media continue peddling the misinformation that women make far less than men. Proponents of the “misleading” wage gap statistic designated April 4, […]