Teens were leaving the Turning Point USA conference in South Florida when they were heckled in the airport by a man triggered after seeing their red Donald Trump MAGA hats.

“You’re wearing a racist hat!” a man announced to fellow fliers, apparently trying to get others to gang up on them.

“Take off the racist hats!” he demanded, as one of the students replied, “Merry Christmas, sir.”

“Take off your racist hats!” he ordered again.

“Love the hats,” a passerby remarked.

“I’m not going to take it off,” a student replied as the video ends.

Kirk only identified them as “high school leaders.” He didn’t ID the airport where the incident took place.

Earlier this year, two teens were sitting in a San Antonio Whataburger when a man walked up, ripped the hat off his head and threw a drink in his face.

“You ain’t supporting s—, n—-!” a man identified as Kino Jimenez, 30, is heard saying on camera after tossing a large drink in the direction of the person filming the video. He then walks away with the hat while muttering “b—- a– motherf——” as one of the other teens sitting at the table appears stunned.

Richard had his original cap returned by police after they arrested Jimenez in Universal City on Friday, WAOI-TV reported. … 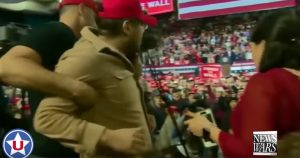 Jimenez was detained Friday on a warrant for theft of person. A jail spokesperson later told Fox News that Jimenez’s bond was set at $5,000 and he was booked and released on bond the same day.

Last year, a college student was triggered by the mere sight of the headwear.

An anti-Trump student at the University of California Riverside who stole a classmates MAGA hat and went on a profanity laced tirade about how it represented “genocide” faced criminal charges.

“You know what this represents? This represents genocide,” UC-Riverside student Edith Macias told the school’s student life office in a video recorded by the victim, Matthew Vitale. “Genocide of a bunch of people. And look at what he’s wearing, in front of a group of people.”

Macias allegedly stole the Make America Great Again hat on Sept. 27, when Vitale showed up proudly displaying the cap at a school conference.

“You stole my property, my Make America Great Again hat,” Vitale said in the video. “She took my hat. This belongs to me. I bought it and she took it from me. It is mine. …

“You do not get to take other people’s property that is legally theirs in this country.”

“Man, f**k your laws, alright,” Macias shot back. “Do you have any conscious?”

Vitale explained to school officials that he was wearing the hat when Macias physically grabbed it off his head, and insisted he has “a freedom of speech to wear this hat.”

“Your freedom of speech is genocide, homeboy,” Macias argued. “I swear to God I wish I could burn this shit.”

So, I visited Berkeley last night. And it was terrific. The students were engaged; the police were finally allowed to do their jobs. Antifa stayed away. Sure, there were protesters – lots of them. That’s […]

The Rev. Franklin Graham has spent a lifetime teaching lessons in morality and following God’s word through real-life experiences, and the evangelist used the recent example of a police officer’s good deed to drive home […]

There are about 12 million Americans who, apparently, believe our country is secretly governed by a mysterious and hyper-intelligent race of ‘lizard people’. No seriously, and before you dismiss this as merely the antics of […]

Seattle City Council overrides mayor’s veto to defund the police; up to 100 officers to be cut