A New Hampshire town didn’t want a safe haven for homeless veterans in one of its spacious neighborhoods. Instead, these “neighbors” would rather see the men back on the streets without shelter. But one vet isn’t giving up the fight.

Over 500,000 Americans remain homeless on any given night in this once-great nation. Now, a story out of the Granite State has many shaking their heads in disbelief. In the spring of 2015 when this newspaper covered the story of Marine Corps veteran Peter MacDonald’s attempts to care for homeless combat veterans with his Veteran Resort Chapel in Lee, N.H., readers were shocked to learn that the town not only wanted no part in his selfless efforts, but they were intent on shutting them down. They’re now on the verge of succeeding. 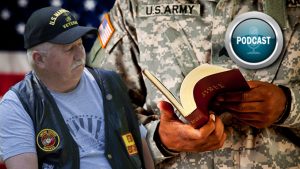 MacDonald, born in 1952 in Lynn, Mass., joined the Marines when he was 17 years old after his father caught him—a second time—fooling around with a girl in the house. It was two days before Christmas, and the youngster found himself homeless.

“He threw me out of the house and it was snowing, and the only place open when I hitched 40 miles to Manchester, N.H., was a Marine recruiter at 11:30 at night,” MacDonald told this reporter. “He told me if I signed a piece of paper, he’d put me up in a hotel room, so I signed the paper, and next thing I knew I woke up in Parris Island, S.C.”

After graduating and on his way home from boot camp, he suffered a traumatic brain injury in a car crash and lost his entire memory. “I had the mind of an infant, but I was in perfect physical shape, and after 60 days in the hospital, because of an admin error I was sent back to active duty,” he explained, getting shipped to Vietnam.

Associated Press, Daily Mail, August 9, 2017 An Atlanta gym owner banned police officers and military members from working out at his facility because they make the largely minority membership uncomfortable. Jim Chambers put up […]

Vet Who Has Raised $17 Million for Border Wall Promises Announcement Next Week: ‘We Have Pulled It Off’

Brian Kolfage, the triple-amputee military veteran who has raised more than $17 million to pay for a wall on the U.S. southern border with Mexico through a GoFundMe campaign is telling supporters on social media […]