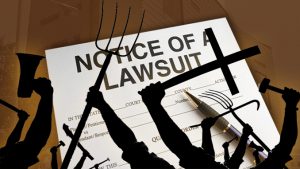 A prominent attorney in Baltimore, Md. has filed a landmark lawsuit in federal court against the Southern Poverty Law Center (SPLC), one of its officers, Heidi Beirich, and a former officer, Mark Potok. Glen Allen alleges that the two, in the course of orchestrating Allen’s dismissal from his position as an attorney with the Baltimore City Law Department, committed numerous unethical and illegal acts, including receipt of stolen property, improper disclosure of confidential and privileged documents, failure to properly train and supervise Beirich and Potok, and falsely claiming Allen was “infiltrating” the Baltimore City Law Department.

Allen sets the stage for his claims by detailing some of the many trenchant criticisms from across the political spectrum that have been leveled in recent years against the SPLC, Beirich, and Potok.

In the filing, he contrasts the robust dialogue, open debate, aversion to taboos, and genuine conversation that lie at the heart of America’s remarkable traditions of free expression—as embodied, among other ways, in the First Amendment—with the SPLC approach, which is “to draw lines of political or cultural orthodoxy, develop massive surveillance networks and extensive dossiers, and severely punish perceived transgressors who cross those lines, seem to cross them, or even seem to think about crossing them,” Allen writes in his complaint.

A student in the ROTC program at Stoneman Douglas High School in Parkland, Florida, claims that CNN’s town hall event on the school shooting was scripted and that they censored him from asking questions that […]

Michael Savage nails it: Antifa-types the ‘brownshirts’ of Dems

Maryland’s largest school district spent over $454,000 for an “anti-racist system audit,” according to documents obtained by Judicial Watch, while the district’s middle school students were taught that the phrase “Make America Great Again” was an […]