Jailed Russian businessman Victor Bout says that “great changes” are looming in the United States and that a revolution is “inevitable” due to how the justice system has been weaponized against President Trump.

Bout has been incarcerated in a Marion, Illinois penitentiary since 2008 after being convicted of selling weapons to the Revolutionary Armed Forces of Colombia but maintains his innocence, claiming his imprisonment was politically motivated as a means of intimidating other Russians into caving to U.S. demands. 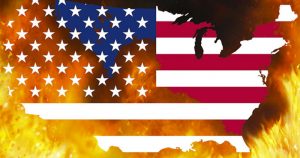 During an interview with RT, Bout said the justice system has become so corrupted that its rulings are a politically charged “cheap farce”.

“They are trying to do what they’ve done to me not only to their distinguished generals but the President himself,” said Bout, adding that the actions of the deep state are fomenting the environment for violent revolution in America.

“This country is at the doorstep of great changes, and, in my opinion, a revolution, which is virtually inevitable, he said.

“Many out there are ready for the civil war: on the two sides, armed to the teeth and only waiting for the moment when someone starts to spill blood,” Bout added.

The prisoner, who complained that judges are “rubber stamping anything the government brings to them” and that “they can indict a ham sandwich in this country,” also slammed the current wave of Russophobia sweeping America, arguing that the two countries have more things in common and that Americans who aren’t transfixed with bi-coastal elitist propaganda recognize this fact.

“Over these years, I’ve formed an opinion that the Americans are largely for good relations with Russia. At least, that’s how it is for those who live in rural areas. The people are conservative, plain out there, where I serve my term,” he stated.

The jihad against the freedom of speech is advancing rapidly, and most people don’t even know it’s happening. Turkey’s state-run news outlet Anadolu Agency reports: Google’s first page results for searches of terms such as […]

According to Pew Research Center, by the year 2035 the number of babies born to Muslim parents will exceed the number of births Christian parents. Even more alarming for many Christians is the indication, later in […]

Speaking to his listeners on Friday, conservative powerhouse Rush Limbaugh described where he thought America is headed if racial tensions continue to rise the way they have been — and it isn’t pretty. “We haven’t […]