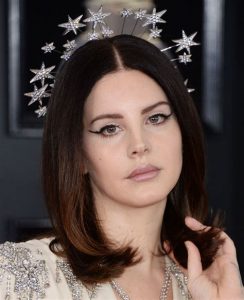 On Thursday, Del Rey mysteriously tweeted, “At the stroke of midnight Feb 24, March 26, April 24, May 23. Ingredients can b found online.” While early speculation wondered whether the tweet had something to do with her upcoming LP, those four dates aligned with the lunar calendar’s “waning crescent moon ritual dates.”

Occultists noted that, on those four dates, practitioners of witchcraft would congregate for a mass ritual that would with the hope that their efforts resulted in Donald Trump’s removal from the Oval Office.

A representative for Del Rey confirmed to Pitchfork that the singer’s tweet was in support of those efforts, with the necessary ingredientsincluding “an unflattering photograph of Donald Trump,” a small bowl of water, a small nail, a “tiny stub of an orange candle” and a Tower tarot card.

The participants will then hex the president and “Bind [Trump] so that he shall not […] fill our minds with hate, confusion, fear, or despair.”

Breitbart reported on an alleged violent act by a liberal Antifa protestor yesterday in Charlottesville, VA. The mainstream has been fairly mute on this act of violence which is surprising because it was inflicted against […]

ICE Goes on a HUGE Bust in California

U.S. Immigration and Customs Enforcement’s fugitive operations officers arrested 188 people from 11 different countries in California during a five-day operation. The people were arrested in the Los Angeles area, and the operation focused on […]

Considering the sordid history of political intrigue and foul play surrounding Hillary and Bill Clinton, the rather mysterious death in Rochester, Minn. of a longtime investigator of the Clintons isn’t generating anything close to the […]