At a Sterling Heights, Michigan City Council meeting on Tuesday, Christians who fled Iraq because of genocide from Islamists said that they felt abandoned and made vulnerable from their city government, most specifically Sterling Heights Mayor Michael C. Taylor. 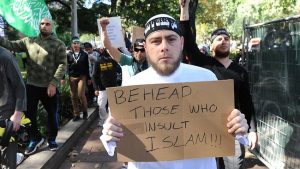 More than 180 people showed up at the meeting to voice concern over the city allowing a mosque to be built in their neighborhood.  Many of these people are Christians, who escaped the genocide in the Middle East, specifically Iraq, and fled to America for safety.  Now, they are being forced to have a mosque place right in the center of their community, a mosque which will hold to the very doctrines that have led to Islamic supremacy for over 1400 years wherever it has been allowed to take root.

“The Christians from Iraq they feel they’ve lost everything, so when there’s a mosque placed right in the heart of their community, it’s not gonna stop,” said Nahren Anweya, a woman whose family fled Iraq in 1989 after they were discriminated against by the Muslims community there.  “There’s gonna be a lot of hostility. The city is creating a tension there.”