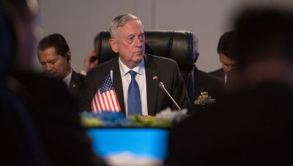 Mr. Mattis gave Mr. Sweeney wide authority over personnel matters, sources said. Mr. Sweeney’s official Pentagon biography states: “He is responsible for providing counsel and advice to the Secretary on all matters concerning the Department.” Said a former Trump campaign adviser: “General Mattis was briefing Hillary during the 2016 campaign and only became a Trump supporter after the election. He then worked hard to keep Trump campaign advisers and surrogates out of the Pentagon while undermining Trump policies all along.

A little girl in North Carolina has been suspended after she found a stick that resembled a gun and decided to play with it. WTVD reports: Hoke County Schools said Caitlin posed a threat to […]

Can America Fight Two Cold Wars at Once?

How did the U.S. reach the point where we’re looking at cold wars on two fronts, and for how long can we maintain this tension? Kim Jong Un, angered by the newest U.S. sanctions, is […]

(LifeSiteNews) — President Trump has chosen a Tea Party, pro-life conservative Christian and former U.S. Army flight surgeon as Secretary of the Army in a move that LGBTQ activists denounced, according to news sources. If approved by the Senate, […]