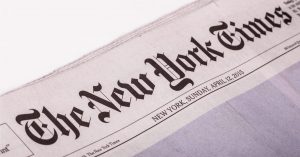 The NYT observes: Two days before Omar Mateen killed 49 people and wounded 53 more at the Pulse nightclub in Orlando, he went on Google and typed “Credit card unusual spending.” Mr. Mateen had opened six new credit card accounts — including a Mastercard, an American Express card and three Visa cards — over the previous eight months. Twelve days before the shooting, he began a $26,532 buying spree: a Sig Sauer MCX .223-caliber rifle, a Glock 17 9-millimeter semiautomatic pistol, several large magazines, thousands of rounds of ammunition and a $7,500 ring for his wife that he bought on a jewelry store card. His average spending before that, on his only card, was $1,500 a month.

In some states, like New York, it is illegal to even own a gun. Which is odd to me because, hello? Constitutional rights!! However, in most states, citizens are able to open carry or simply […]

Conservative pundit Katie Pavlich is tired of leftwing feminists arguing that everything but the 2nd Amendment is a new front on the war for women’s rights. In fact, while many of the battlefields that feminists […]