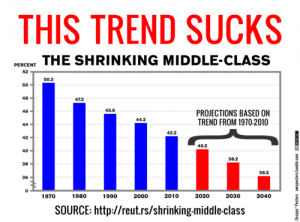 New York City’s shrinking middle class is now in full retreat, as masses of our most endangered population depart the city in numbers not seen since the Depression, according to analysts. After decades of sharp income erosion in the face of relentless taxes, escalating living costs and wage reductions through technological changes, the full extent of this shocking exodus is laid bare in the latest US Census data. That shows the city is losing 100 residents each day — with departures exceeding new arrivals.

MINNEAPOLIS – The push to develop a cheaper way to manufacture phone batteries and car parts in the U.S. has hit a roadblock. The U.S. gets over half the minerals it uses to make home building supplies and electric cars […]

Millions of Americans are paying taxes this week. What worsens the pain is to see President Joe Biden spending our tax money on hotel stays, debit cards and cellphones for illegal migrants crossing the southern […]

Disney Plus quietly pulled “Dumbo,” “Peter Pan,” “The Aristocats” and “Swiss Family Robinson” from kids’ profile accounts and added warning labels for adults. The move by the streaming site for the Disney classic films was first noted […]